In December 2011, 63-year-old Stewart Lee Krienke was riding his bicycle down Figueroa St. in Carson, CA when a large tractor-trailer suddenly made a left turn and collided with him. Mr. Krienke sustained a major traumatic brain injury.

Shortly thereafter, Mr. Krienke’s sister and conservator hired us to pursue a personal injury case against the truck driver and his employer, a medium-sized trucking company. Although the wheels of justice often spin slowly in catastrophic injury cases such as this, and quick settlements are usually bad settlements, our goal was to obtain both a quick and a good recovery for Mr. Krienke, so that he could benefit from the funds before it was too late to do him any good.

We filed and served a lawsuit right away. It soon became apparent that defense counsel were inexperienced and did not appreciate the magnitude of the case or the risk that it posed for the insurance carrier and clients that they represented. When we asked how much insurance coverage the trucking company had, they responded that there was a single $1 million policy.

Our own independent research suggested that there might be more coverage. So we followed up with additional questions regarding insurance coverage and scheduled the deposition of the trucking company’s owner. After much hemming and hawing, the defense lawyers finally conceded that, in addition to the $1 million policy, there was a $4 million umbrella policy.

The next step was to set up the case for either a $5 million settlement or a jury verdict at trial for a greater amount. Here again, the defense lawyers’ inexperience became apparent when they initially scoffed at the notion that the case was worth anywhere near the $5 million limits of the two insurance policies. To remove any doubt about that, we hired several top-notch experts and provided the defense lawyers with, among other things, a detailed breakdown of Mr. Krienke’s future medical care costs, a video showing his day-to-day struggles and an illustration describing the nature of his brain injury (refer image). 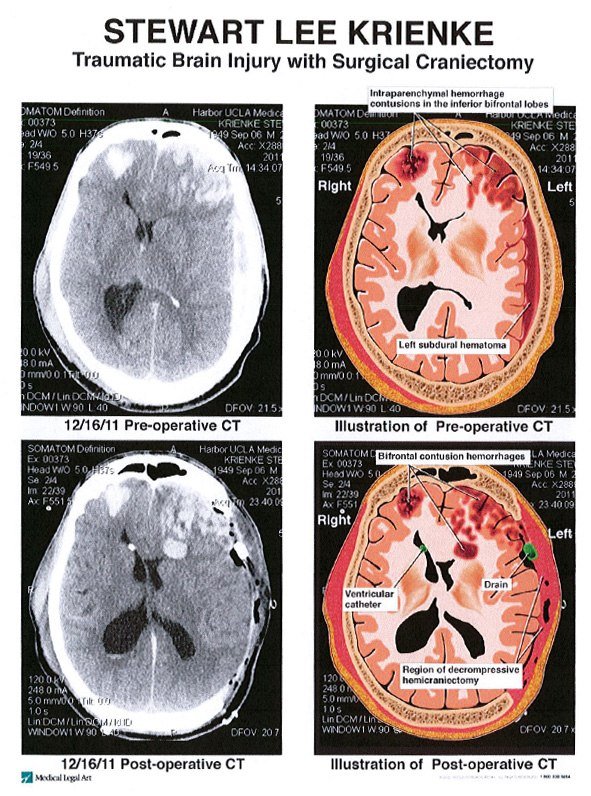 We followed this up with a non-negotiable settlement demand for $5 million that would expire in 30 days. At this point, the insurance carrier had an important decision to make. If it rejected or ignored our settlement demand, this would expose it to potentially much greater liability at trial. No insurance adjustor wants to be in a position where he has to tell his boss that a case that they could have settled for $5 million is now going to cost them $10 million.

In a last ditch effort to avoid this difficult decision, the defense lawyers requested that we attend a mediation before the expiration of our settlement demand. We declined. Our position was that the case was worth more than $5 million, and our settlement demand was simply the carrier’s last opportunity to settle the case for a number that was within the limits of its insurance policies. We were kind of hoping they would not pay the $5 million, so that we could seek a much larger number at trial.

When the deadline arrived, the insurance carrier finally accepted reality and agreed to pay the $5 million policy limits. The settlement was reached less than nine months after the accident, which is extraordinarily fast for this type of case.

Mr. Krienke remains in a skilled nursing facility and is unable to speak or care for himself. However, he now recognizes and responds to his family and caregivers. The settlement has provided him with the funds necessary to pay for all of his future care, including care that goes well beyond what the facility itself provides. This will make his life considerably more comfortable, likely increase his life expectancy and remove any financial burden for his care from his family.

Had we followed the conventional path of getting all of our ducks in a row before filing a lawsuit and then waiting until the last couple of months before trial to fully prepare the case, we might have still settled for $5 million, but it would have taken much longer. Mr. Krienke’s care would have needlessly suffered in the meantime, and his condition likely would have deteriorated.