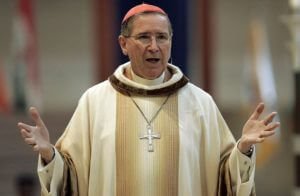 The Roman Catholic Archdiocese of Los Angeles, together with its former leader Cardinal Mahoney and an ex-priest, agreed to pay a total of $10 million in settlement due to four child abuses cases against them. The news broke as Cardinal Mahoney was in Rome to take part in choosing the new pope.

Mahoney was the head of the largest archdiocese in the US until 2011, when he retired. He was accused of helping Michael Baker, a priest who confessed to being a pedophile, evade legal repercussions by sending him out of state to a Church-run treatment facility. He then placed Baker into a position that including a residence near a school. Baker was convicted in 2007 and was sent to prison on 12 counts of sexual abuse. He served three years of a ten-year sentence and was released in 2011.

The Archbishop admitted to making mistakes in how he handled the allegations. Clergymen were not mandatory reporters by law in California until 1997.  Mahoney was forced to retire in January because of his actions, but retained the title of cardinal. Sexual abuse cases have cost the church billions of dollars, including a $660 million settlement to over 500 victims of sexual abuse.