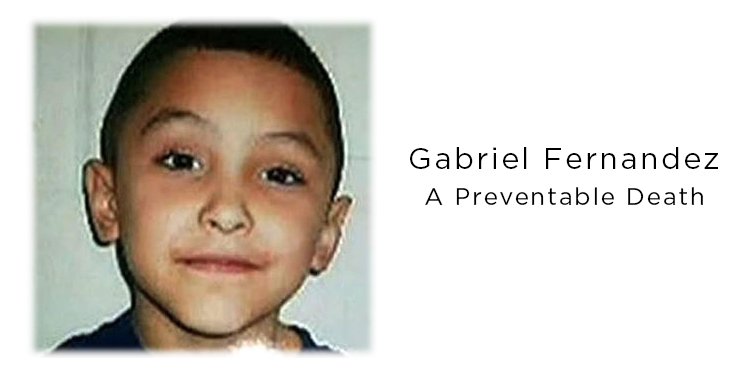 Interview with Roger Booth and Carly Sanchez on March 3rd, 2020 discussing the Gabriel Fernandez story.
The discussion explores how these horrific abuses happen and what can be done to help prevent them in the future. This interview is a response to the large number of visitors to our website who watched the Trial of Gabriel Ferndez on Netflix.

The article below was originally published last Nov 17, 2015.

On May 22, 2013 authorities responded to an emergency call at the home of Gabriel Fernandez because the 8-year-old had stopped breathing.

When paramedics arrived, they found a bruised and beaten Gabriel. His skull was cracked, three of his ribs were broken, BB pellets were embedded in his bruised and burned skin, and two of his teeth had been knocked out. He was immediately taken to a hospital, but tragically died two days later.

How did the California social care system fail Gabriel Fernandez? 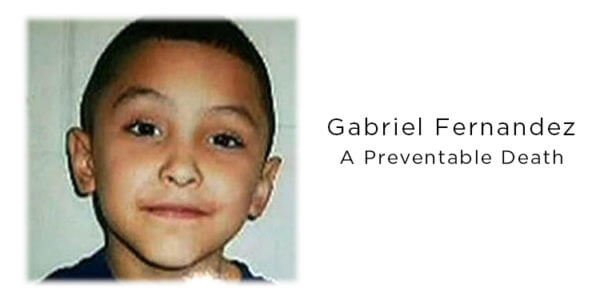 From 2003-2012 over 60 complaints were filed against Pearl Fernandez and her boyfriend, Isauro Aguirre. These complaints prompted 8 investigations by both Los Angeles County Child Protective Services and the Department of Children and Family Services; however, both agencies claimed all but one of these complaints were unfounded.

In the days following this tragic death, questions began to emerge about Gabriel’s short and painful life.

In 2003, Gabriel’s mother, Pearl Fernandez, was investigated by county social workers for an allegation of severe neglect. She and her son, the elder sibling of Gabriel, were involved in a car accident in which her son suffered a head injury because he was not wearing a seatbelt. A year after that, a relative filed a complaint with Child Protective Services claiming that Fernandez was beating that same son. Social workers stated the claim was unfounded. Fernandez kept her children.

Shortly after his birth in 2005, Gabriel went to live with his maternal grandmother. In 2007, another complaint was filed against Fernandez claiming that she neglected to feed one of her daughters and threatened to break her jaw when she cried. Fernandez was also convicted of using a weapon in a reckless manner and was sentenced to two weeks in a Texas jail.

In spite of all this, Fernandez took back custody of Gabriel in October 2012 telling social workers that she was concerned about how her relatives were treating him.

“The red flags were all over the place. They were ignored. It is just inexplicable to me,” said county Supervisor Zev Yaroslavsky, noting that the Sheriff’s Department was also aware of the abuse allegations.” Los Angeles Times

After Gabriel went back to his mother in 2012, his teacher began calling social workers, stating that Gabriel’s face and hands were bruised. Upon investigation, Gabriel attributed these injuries to being hit with a belt buckle. Over the next several months that same teacher reported Gabriel coming to school with scratches, a busted lip, and a swollen face with bruised dots. Gabriel attributed these to being punched and shot with a BB gun by his mother. During investigations, Gabriel retracted his statements because social workers failed to interview him without his mother present.

On March 26, Gabriel’s therapist filed a report claiming that Gabriel had been forced to perform oral sex on a relative. Again, he was interviewed in his mother’s presence and retracted his claim. A week before his death, Gabriel’s school asked a sheriff’s deputy to investigate the situation, but the officer stated that he was given the wrong address. He said that when he was able to speak to Fernandez on the phone, she claimed that Gabriel had moved to Texas with his grandmother.

After Gabriel’s death, four social workers were fired for their failure to act. Fernandez and Aguirre have both plead guilty to capital murder and torture in order to avoid the death penalty. They will both be in prison for the rest of their lives without the possibility of an appeal or parole. As a result of the investigation, LA County has changed training methods, including training visits with more senior social workers and real-life training scenarios to help social workers gain experience before going out into the field. However, the changes come too late for Gabriel Fernandez.

In mid-2018 another child died in a similar manner. Anthony Avalos suffered “severed head injuries and cigarette burns covering his body” (Los Angeles Times, 2018 June 24). The 10-year-old’s mother was allegedly reported multiple times for abuse and neglect of Anthony and seven other children. The reports were made by teachers, administrators, and family members. Despite multiple investigations, the child was not removed permanently from the home.

Our firm recently won more than $11 million for two clients in Riverside County. The first case involved a young girl who was repeatedly raped by her mother’s boyfriend and eventually became pregnant at age 13. County child protective service agency investigated but failed to protect the girl.

The second case involved a two-year-old girl who was subjected to severe neglect, including living in an apartment with her deceased newborn sister for two weeks, because the County child protective service agency failed to intervene.

Why Did No One Save Gabriel Fernandez?, The Atlantic