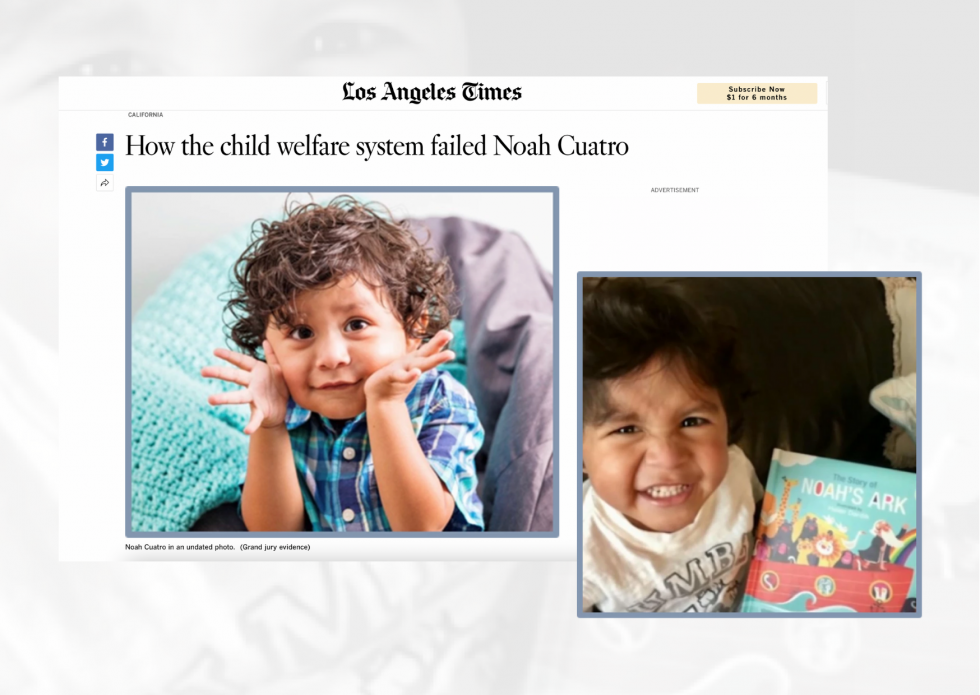 LA Times colleagues Matt Hamilton teamed with Garrett Therolf and Daniel Lempres of the Investigative Reporting Program at UC Berkeley to investigate the case facts in the killing of 4-year-old Noah Cuatro in a damning study of the L.A. County child welfare system.

The Los Angeles County Department of Children and Family Services had a long relationship with Noah’s family. “Errors, misjudgments, and bureaucratic friction inside the child welfare system — including among top supervisors — hindered several opportunities to protect Noah,” according to the Times-UC Berkeley report.

Noah told a DCFS employee at one point in his brief life that he did not want to leave Hernandez and his grandfather, saying, “This is my home.” Grandma and Grandpa are very fond of me.”

Noah passed away on July 6, 2019, only a month before his fifth birthday.

This investigation by the New York Times and UC Berkeley is the first time the public has access to a complete account of the decisions made by county officials in this family’s case.

One of the more perplexing decisions was to ignore a court order that would have Noah removed from his parents’ custody and subjected to a medical or sexual abuse examination.

According to the Times-UC Berkeley investigation, once the judge issued the removal order, “DCFS had 10 days to get Noah out and seen by a doctor, even if it meant barging into the home with cops.” Noah’s life could have been saved if that removal order had been carried out.”

DCFS, on the other hand, disobeyed the order and kept Noah with his parents. He died after less than two months. Ursula Juarez and Jose Cuatro, his parents, are suspected of torturing and killing him.

According to several officials, DCFS could not have predicted Noah’s death.

Michael Nash, who oversees child protection for the Los Angeles County Board of Supervisors, stated, “You went from virtually little physical abuse to the worst type possible: the child was murdered.”

Bobby Cagle, the director of the DCFS, refused to tell the Times-UC Berkeley team if any of the workers involved in Noah’s case had been disciplined. Rather, he defended his agency’s policies.

“I believe it’s particularly difficult for the public to comprehend why those decisions were taken,” he said, “but I’m sure that the decisions that were made were the right ones.”

Ursula Juarez and Jose Cuatro, Noah’s parents, were charged with murder and torture and have each pled not guilty. Their lawyers did not respond to a request for comment.

To balance out that horrible story, here’s a heartwarming story about a kid who spent some time in foster care and is now one of the stars of the Torrance little league team that is playing in the Little League World Series.