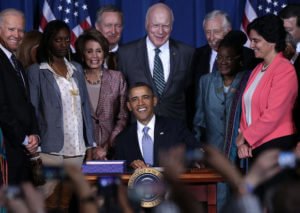 US President Barack Obama signed into law the reauthorization of the Violence Against Women Act, officially ending the debate surrounding changes in the act, which now includes federal aid to gay, immigrant and tribal victims. The law also added services for its original beneficiaries, women.

“We’ll expand them to cover even more women, because this is a country where everybody should be able to pursue their own measure of happiness and live their lives free from fear, no matter who you are, no matter who you love,” Obama said.

A primary concern of conservative opponents of the bill had been a provision that changes tribal law to allow tribal courts to try nonnatives. Opponents said the change might be unconstitutional. A recent proposal from some House Republicans removed the tribal provision, along with services for lesbian, gay and transgender victims of domestic violence and other contentious language. A dispute that had been shaping up between the most conservative Republicans and their more moderate colleagues was cut short by a move from Speaker John A. Boehner to skip internal debate and bring the legislation to the House floor, where it passed with Democratic and Republican votes. (Chicago Tribune, 7 March 2013)

The act was first introduced 19 years ago by then Vice President Joe Biden, who was still a senator at that time, and was instrumental in bringing domestic and sexual abuse into the national debate. It provided funding for resources and support groups for individuals who had been assaulted or abused.

The bill was passed by the Senate on a bipartisan 78-22 vote, while the House passed it on a 286 to 138 vote. The support of the White House has been well-known at an early stage.