Yeshiva University High School for Boys – a prestigious Modern Orthodox in Washington Heights known for its excellent educational standards – has been rattled due to reports about sexual abuse involving faculty and students in the 80’s. 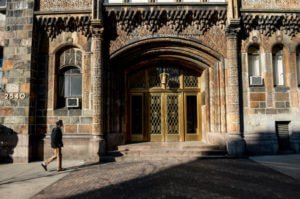 Mordechai Twersky, a 1981 graduate of the high school, has claimed he suffered abuse at the hands of George B. Finkelstein, a vice principal at the school. Twersky was asked by Finkelstein to wrestle with him, when Twersky refused, Finkelstein assaulted the student and pinned him to the ground. Twersky’s parents notified the school, but complaints were brused aside.

In the same year, another student complained that Rabi Macy Gordon, another teacher, has sexually abused him.

Rabbi Gordon’s accuser said his parents had complained to administrators, who promised action but did nothing. Several years later, Mr. Twersky, who said he wrestled with Rabbi Finkelstein twice more, also raised concerns with administrators, and several other students also complained about the rabbi’s wrestling. Yet administrators of Yeshiva University, the prestigious Modern Orthodox institution in Washington Heights that runs the high school, allowed each man to simply leave.

The university president from 1976 to 2003, Norman Lamm, who is now its chancellor, told The Forward that he never notified the police.

Dr. Lamm told the paper that when the school received complaints of sexual activity involving the staff, “if it was an open-and-shut case,” he would just let the staff member “go quietly.”

“It was not our intention or position to destroy a person without further inquiry,” he said.

“This was before things of this sort had attained a certain notoriety,” he added. “There was a great deal of confusion.”

In 1995, after administrators confronted Rabbi Finkelstein about the wrestling, the rabbi “decided to leave because he knew we were going to ask him to leave,” Dr. Lamm told the newspaper. The rabbi became the dean of Samuel Scheck Hillel Community Day School in North Miami Beach, Fla. Yeshiva did not notify the school about the accusations, Dr. Lamm told The Forward, and the school never asked.

Officials of the Florida school did not respond on Thursday to questions about Rabbi Finkelstein.

Rabbi Finkelstein eventually moved to Israel, where he served as the director general of the Jerusalem Great Synagogue, and is now its ritual director. To The Forward, he acknowledged wrestling with students “as a way of trying to remove the distance between students and faculty,” but said the physical contact was not sexual.

Around the time the Jerusalem synagogue hired him, rumors reached synagogue leaders about the rabbi’s inappropriate conduct, said Zalli Jaffe, the synagogue’s vice president, in an e-mail on Thursday. Mr. Jaffe said the synagogue’s president contacted a “very high authority” at Yeshiva, “who denied the charges outright.”

The same allegations of sexual abuse resurfaced about four years ago, but the synagogue accepted Rabbi Finkelstein’s declarations of innocence because no charges had been filed. (Even if the police were to investigate the men today, criminal charges would be unlikely because the accusations described in The Forward happened too long ago under New York’s statutes of limitations.)

“Naturally the synagogue will carefully study the article and we will take advise in this matter, so we can conduct ourselves as befitting the Great Synagogue,” Mr. Jaffe wrote.

Rabbi Gordon retired from Yeshiva in 1984 and moved to Israel, and both he and Rabbi Finkelstein serve on an advisory board for the Council of Young Israel Rabbis in Jerusalem. New York Times, 13 Dec 2012.

At present, both Gordon and Finkelstein have left Yeshiva and are in Israel. After Mr. Twersky’s interview was published, more students came forward with their own accounts of how some faculty in Yeshiva University High School for Boys have sexually abused them. The current president of the university has expressed his concern about the recent events and has promised to look deeply into the events.